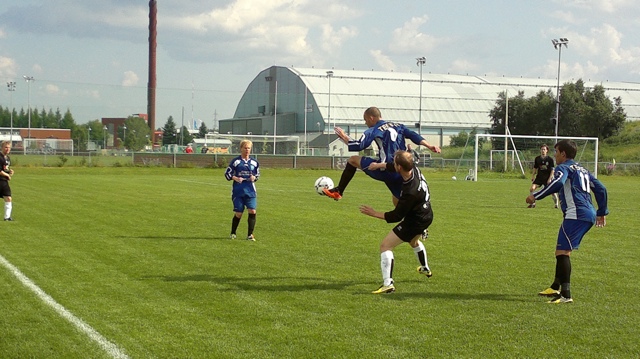 First half started with Haupa in control, though few half-chances fell also to Pappa-side. But it was Haupa which opened the dreadlock after 15 minutes, when they broke neatly through from the left and a cross found unmarked Haupa-winger who slotted freely to the net. After the goal Papat began to get grip of things, and in few minutes the visiting team gave even more support in the form of red card, which came after Haupa-player twice sounded out his not-so-polite opinion of the appearance of a Pappa-defender, with referee rightly sending the player off. Papat now had the space exploite and as a result, started even create half-chances, but nothing came out of those before the interval.

With Haupa one man down, the game was for a taking during the second half, but Papat decided to create a twist to the plot, which even Shakespeare would’ve been proud of. No movement, hardly getting out of their own half and when doing so, misplacing passes with admirable ease. Headless chickens would be the best way to describe things, if it wasn’t an insult towards the chickens. Credit to Haupa, who moved and passed the ball very well, but this was as lacklustre as it gets, with only the heroics of a striker-turned-keeper Miska Visuri keeping the sheet clean, and one goal disallowed as an offside. Luckily, it was Arto “Asse” Oikarinen to the rescue. With good 10 minutes left, Ville Vesanen played a high ball behind Haupa defenders, with Oikarinen sharply following it and brilliantly chipping it over the Haupa’s goalkeeper, who was probably wishing being few inches taller. Top drawer! What followed was intense last moments, but both sides drew blanks and the points were shared.

Sour taste, but on the other hand, a point from the leaders is always a point. With two weeks to next confrontation, Pappa-side has time to heal the mental and physical bruises and maybe even train once, but make no mistake, things have to get better or the fat lady won’t start her aria for any time soon. Luckily the remaining matches are not played on the velvety ground of Talvikkipuisto, of which overall usage as a playing ground makes hiring Joey Barton, as a messenger of constructive feedback to decision makers, seem like a good idea.

Several sheep bottoms to the others!