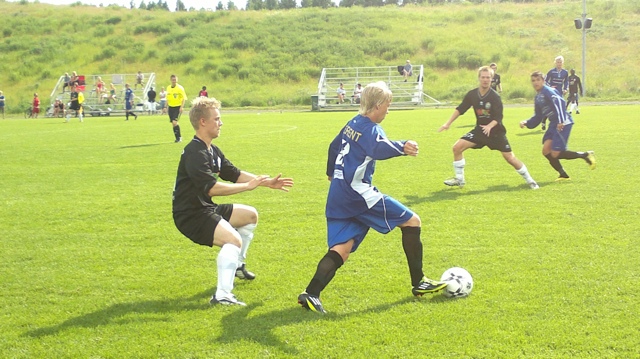 One pappa was called-up to the first team, three were travelling (they really were on try-outs in Barca, Paris and Kemi!?) and rest were away with many different injuries like true Pappa would. Nevertheless, Papat got twelwe names to list, which one of had to leave after 30 mins with important national matters. This naturally meant that rest had to play the whole match. (Whole match?! With my condition?!) Thinks went better than expected, until on 63th minutes referee blew a penalty kick to KTU. Goalie got ball from a KTU attacker on the right side of the goalie's area and eventually brought down the attacker next. For some odd reason referee decided that this was too harsh and gave goalie a yellow card. Everyone else on the pitch were amazed, since same kind of a situation in any other game, or in a higher league, wouldn't have been a foul. Stupid referee.

Papat have to give credit to KTU thou, since they were much more in control of the match, and created more good chances than tired Herkku-Papat. Only good luck, good positioning and self-sacrificing by Pappa defence prevented KTU to score more goals. Papat had a few chances on both halfs, but nothing came out from them. Maybe some shooting practice at the training next time? 🙂